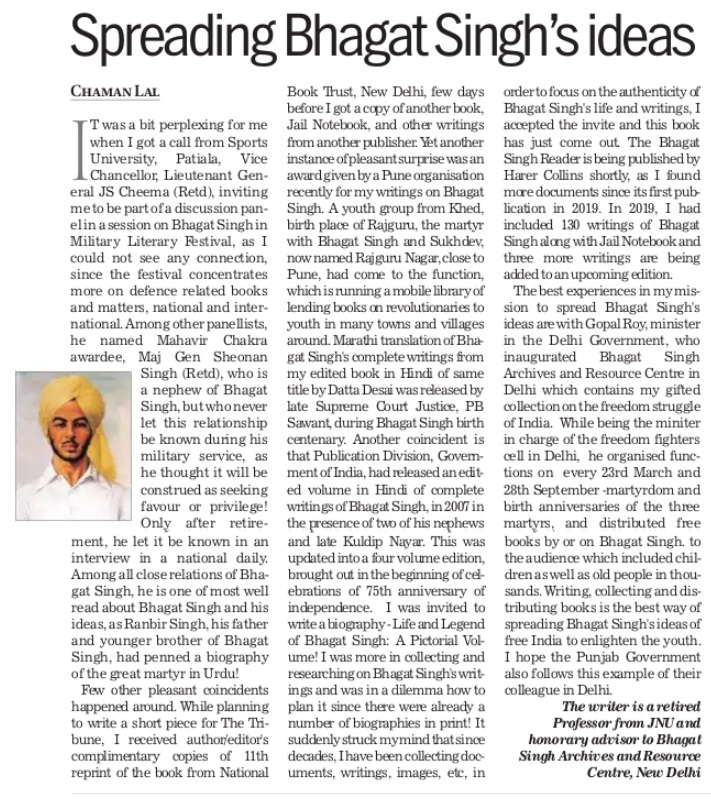 Shiromani Akali Dal (Amritsar) states that if we are to spread Bhagat Singh’s ideas who killed two innocent policemen, one an young English man Saunders and the other an Amritdhari Sikh Head Constable Channan Singh and then threw a bomb, which did not explode into the Assembly, then we must also study the life of and ideas of Nathu Ram Godse.

Godse and his supporters also held reasons why Godse did what he did. These supporters were and are of the view that Gandhi, Nehru and Jinnah should not have sat with the British Viceroy Mountbatten and what did Prime Minister Atlee of UK finally did, that being dividing Punjab and Bengal on communal lines.

They believed that British India after the British left could be governed as a federation by giving the Muslims equal representation in all the forums of the Union Government.

By studying both these characters we will arrive with reason at a conclusion whether they were correct in what they did and why they did what they did.

As far as our party is concerned the amount of gangsters and extremists who have been created in the recent past is because the Aam party government in the Punjab headed by Mr. Bhagwant Mann are glorifying Bhagat Singh by putting up his pictures in every government office and Circuit Houses.

I visited the Punjab Governor in his office at Raj Bhawan the other day, and found that he had not put up the picture of Bhagat Singh as per the policy of his government. I was surprised.

Both Bhagat Singh and Godse were killers and the present day gangster and the extremist is also a killer. So they have to be studied together, as their deeds or misdeeds have created chaos and anarchy.

Prime Minister Modi has named the Chandigarh Airport after Bhagat Singh. Our party has answered back to say then that the Adampur Airport should be named after Nathu Ram Godse. The names of Bhagat Singh at Chandigarh Airport, the name of Indira Gandhi at International Airport at Delhi and now the name of Nathu Ram Godse at Adampur Airport and the name of Rajiv Gandhi in place of Connaught place in Delhi will all make Hindu India Great. This will please all rightwing Hindutva peoples.