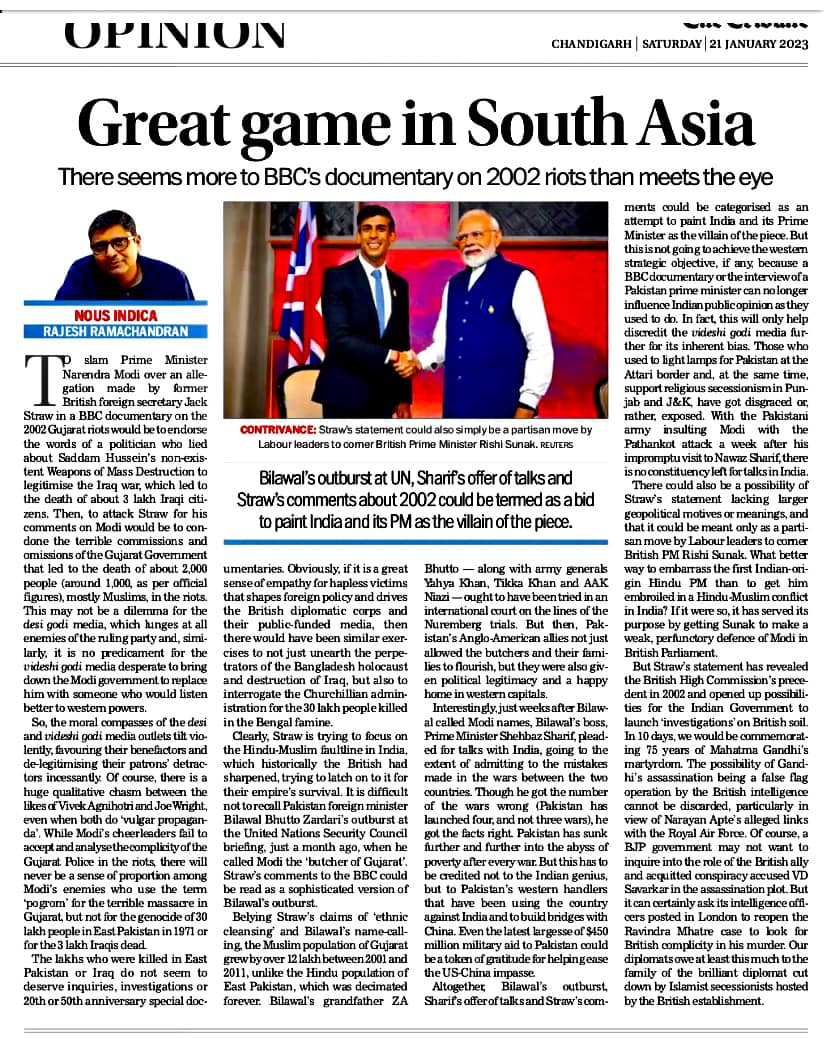 Comments by Simranjit Singh Mann Shiromani Akali Dal (Amritsar) states that the editor of the Tribune Mr. Rajesh Ramachandran who edits this newspaper, which is largely read by the Punjabi’s, wherever they be settled, does not know the old phrase that charity begins at home.

He talks about the insults of Mr. Bilawal’s at the UN, the mass killings by the Pakistan army in the East and the West or about Mr. Straw and the 2002 tragedy, which he defends, but forgets to mention Operation Bluestar of 1984, which was provoked by the former editor of The Tribune Pram Bhatia and the subsequent genocide ordered of the Sikh’s by Rajiv Gandhi, all of which led to the genocide, memoricide, ethnocide and vandalism of the Sikh peoples and their heritage.

He does not know from Adam but lambasts my grandfather and me in this weekly column, writing malevolently . He is a lone minority baiter, specifically of the Sikh’s and the Muslims and denigrates the Sikh religion by referring to the Sarovar or Pool Nectar at Darbar Sahib(Golden Temple) as a “Chapar” or pond.

Our Party thinks that he presides over The Tribune as Emperor
Aurangzeb who martyred the Sikh IX Guru Tegh Bhadar Sahib. He keeps our Party which is now the Chief opposition Party, the Congress, Badalites, Aap party, Communists all having surrendered to the extremist Hindutva Party the BJP-RSS, out of his inheritance.

He mentions the Gujarat Tragedy but says there were worse tragedies than this and cannot see Mr. Bilawal crude remarks as a precursor of the BBC documentary. He cannot argue for the state he defends logically, but only utters hate in a manner that of a misanthropic, which we have suffered for a long time. It is time that the Board of Trustees think of giving the Punjabi’s and the Sikh’s a little respite for the time being by telling him that he is the editor in a newspaper that believes in secularism and minorities of the land are a part of the whole.

We will be grateful.