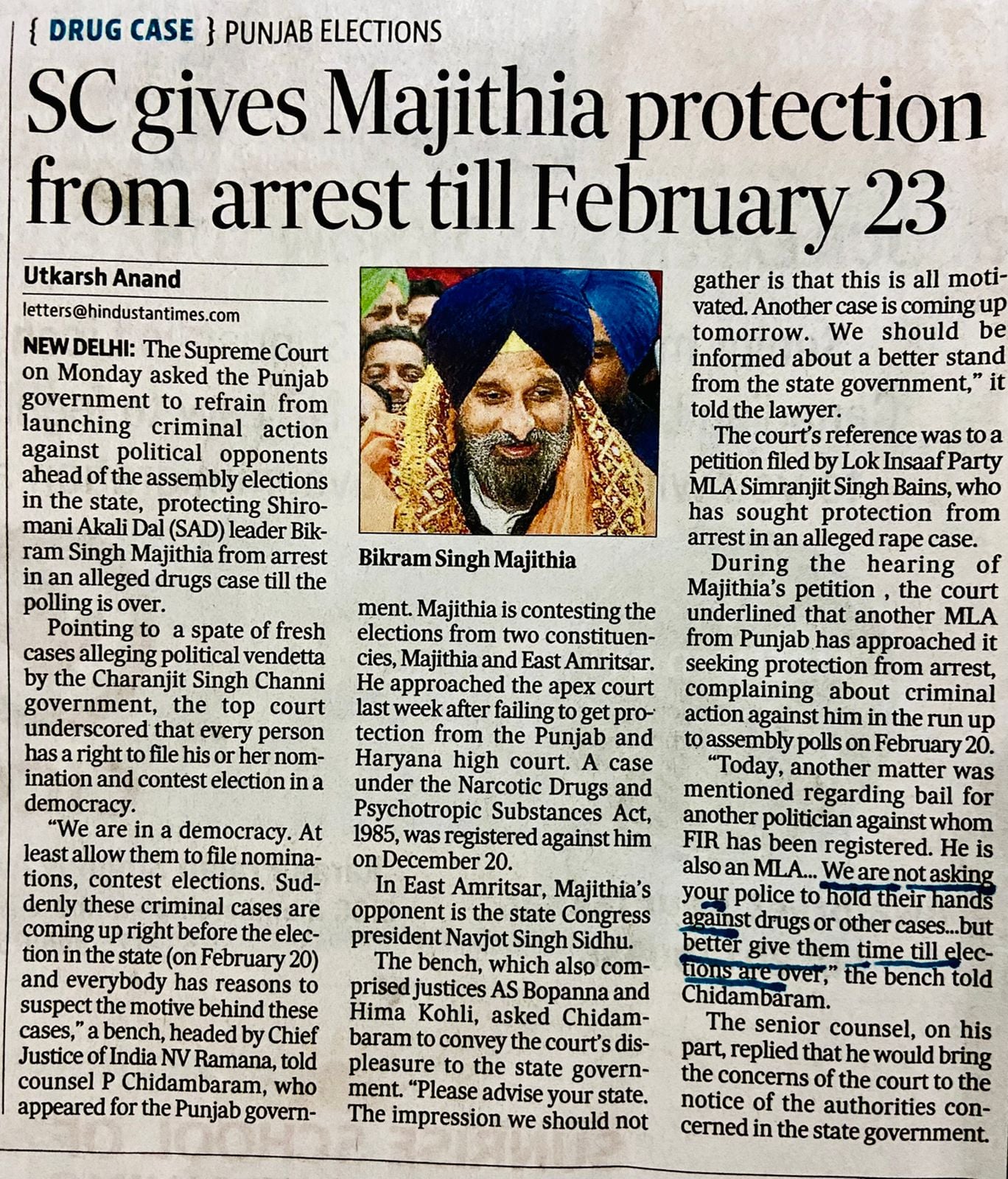 Comments by Simranjit Singh Mann: Shiromani Akali Dal (Amritsar) states that it is unprecedented that the Punjab and Haryana High Court gave bail to Bikram Singh Majithia facing charges of smuggling dangerous drugs. Now the Supreme Court has also followed suit by giving relief from arrest to Majithia.
When the Supreme Court gives such rulings that defy logic, it also sets a precedent for other Drug Lords to follow.
There are many Drug Lords facing such charges as Majithia. As per article 14 of the Constitution, it logically follows that they should also be set free from jails, where they are spending years in toil and punishment, as all are equal before the law as this article states.
It is clear from the judgement of the Supreme Court Judges that they do not feel comfortable in giving relief to Majithia as the Hindustan Times Dated 01st February 2022, quotes them –
“We are not asking
your police to hold their hands
against drugs or other cases…but
better give them time till elections are over,”. This is a peculiar judgement which would and has demoralised the agencies fighting a war against drug proliferation.
If the Judges heart goes out for democracy and elections, I would like to tell them that I was jailed for five years and even the great jurist Ram Jaithmalani pleaded in the Supreme Court that I be granted bail. This was denied. If I could contest the Parliamentary elections of 1989 incarcerated in Bhagalpur Jail, I see no reason why the rich and mighty charged with drug running cannot fight an election from jail.
We feel the Supreme Court should make men of sissies. But in this case it appears the top Court appreciates sissies who run to Mummy and cannot fight their own battles.
But what is more dangerous in this judgement is that the Supreme Court not only sets precedents but in this case it annunciates a laissez -faire drug policy.
As such this is a precedent making judgement. Hereafter Drug Lords will be seeking relief from arrest citing this case for relief to the lower wrung of the judiciary.
We also learn from the Hindustan Times dated 1st February, 2022 that Their Lordships will also be hearing a case of a MLA, who is also contesting the elections like Majithia but in this case he (Simranjit Singh Bains) is charged with the heinous crime of rape.
Since the logic of the Supreme Court is that both Majithia and Simranjit Singh Bains are contesting elections and since democracy takes precedence over commission of drug running and rape, relief would therefore naturally be given to Simranjit Singh Bains.
Happy days to them both.
Our Comments are from the Hindustan Times dated 1st February,2022, which we print below :