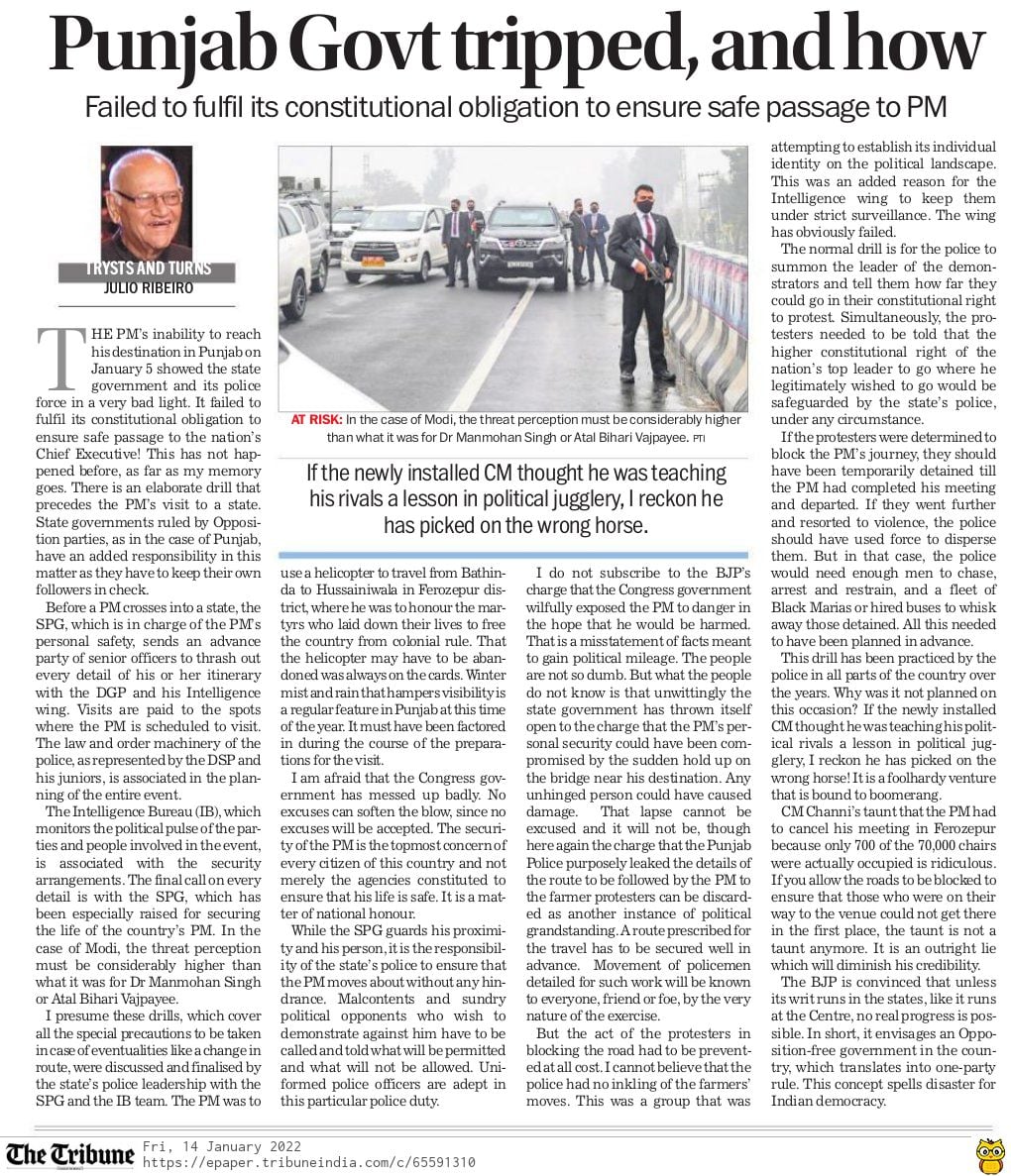 Comments by Simranjit Singh Mann: Shiromani Akali Dal (Amritsar) states that the author Mr. Julio Ribeiro does not have enough experience as a placeman to comment on police working in a frontier province of the Punjab. He must have been a good policeman policing the coastal shore line of the country and catching big gangsters of Bombay.
Policing in Punjab is a difficult task for an urbanite Police Officer like Mr. Ribeiro. We will appreciate if Mr. Ribeiro reads what really took place when Premier Modi was here in the Punjab.
This is how our party sees the visit of Premier Narinder Modi to the Punjab on 05th January 2022.
Shiromani Akali Dal (Amritsar) report on security lapse at Ferozepur. Simranjit Singh Mann.
Premier Modi’s visit to Ferozepur seen through the eyes and experience of Simranjit Singh Mann. A disaster averted.
Union Government is responsible to see and ensure the safe and successful visit of its Premier’s visits to the states of the Union. To accomplish this task the Union Home Ministry has at its disposal the services of the intelligence and military services. R&W, I.B. Military Intelligence and the states CID’s provide ample inputs into such visits.

The Premier visited the Punjab on 05th January 2022. The Union had the services of the Metrological department and since a layman knew that the weather was going to be bad, Union Home Ministry should have made elaborate arraignments for this visit to the border state of Punjab which has a 600 kms long border with Islamic Pakistan. Since the creation of the Hindu Indian state and Islamic Pakistan in 1947 there has been bad blood by both the Hindu and Islamic countries. Therefore, it was all the more important that heads should have been put together to plan the visit.

On 05th January 2022 Premier Modi had been seen off from Delhi to Bathinda in his aircraft, which was not accompanied by two jet fighters nor did Premier’s aircraft have the equipment to ward off shoulder fired FIM-92 Stinger missiles.

Premier Modi landed at Bathinda and he should have been provided with an all weather helicopter that being an Apache, Chinook or MH-60R helicopter. He was not provided with these latest machines which could weather the weather.

He was made to travel from Bathinda to Ferozepur in vehicles that were not bullet-proof. We don’t know how the SPG, NSG and I.B. allowed him to travel in such vehicles which could have proved hazardous.

The Home Ministry knew that the farmers were in agitation in the Punjab and when Mr. Modi was the Chief Minister of Gujarat he had had 60 thousands Sikh farmers evicted from their legitimately held farmlands in 2013.

Since 2015 the Punjab state government in the hands of Badal, BJP-RSS had committed heinous crimes of sacrilege of the Sikh religion. Till date no action has been taken though the SPG and I.B. made Mr. Modi travel by road through villages Bargari and Behbal Kalan. In the latter village Parkash Singh Badal, his son and Home Minister Sukhbir Singh had ordered their DGP Saini to shoot down protesters asking for justice. Two Sikhs Bhai Gurjit Singh and Bhai Krishan Bhagwan Singh were shot dead in cold blood in that village. Was it wise for the Premier to take this route where the Sikhs led by Shiromani Akali Dal Amritsar were protesting and courting arrest against this sacrilege and killings for the last 184 days?

If these were the grouses of the people then the Home Ministry, SPG and the I.B. should have monitored the route of the Premier from its satellite. Why was all this not done? When Premier Modi arrived in Ferozepur at the bridge at village Mishriwala where our Party has strong cadres, seeing the Premier’s cavalcade at Mishriwala our cadres immediately mounted the bridge and stopped curious crowds lunging forward to see what the commotion was all about. On the other hand our Party’s senior members Jaskarn Singh, Gurcharan Singh Bhullar, Deol and Thind were protesting and giving a memorandum to the Deputy Commissioner about the state of affairs of the Sikhs and the Punjab. In fact nothing un-toward happened despite the callousness of the Union Home Ministry.

Then Union Home Minister Amit Shah said that the Congress Party intended to harm the Premier physically. We know that the Congress Party is not a party above massacring its own people. It had spilt the blood of the Sikhs in 1947, 1984 and then again under Rajiv Gandhi who committed the genocide of the Sikhs all over the country in late 1984. It is true that the Congress Party has a long and lasting grouse against the RSS and BJP for the murder of the leader Mohan Dass Karam Chand Gandhi. Therefore, this aspect needs a further probe by an impartial Commission. Presently the Union Government is harassing the Punjab Government, its IAS and IPS officer’s for endangering the security of the Premier.

But we asks why did the Union Home Ministry increase the jurisdiction of the BSF which is only meant to patrol the border but its search and arrest powers were increased from the border to 50 kms into the hinterland. Therefore, the responsibility to safeguard the Premier lay on two different agencies-the Punjab Police and the BSF. Duality of command never works and creates a diarchy in responsibility. Therefore, the fault lies with the Union Home Ministry and the Defence Ministry in not providing Apache, Chinook or MH-60R helicopter. The National Security Adviser and the Union Home Secretary should have made these arrangements in coordination with all the concerned Ministries and organizations. Both failed.

We also ask why the Directors of R&W, I.B and the Home secretary Mr. Bhalla were giving extensions in service post retirement when they had failed to give timely information about Communist China, its PLA making a thrust into Ladakh in 2020. We also ask what the Nation Security Advisor Ajit Doval was doing to safeguard the visit of the Premier form internal and external danger.

I have been an IPS officer having been posted in the districts of Ferozepur and Faridkot and during the course of this tenure I saw to the secure visits of Foreign Minister Vajpayee to Ferozepur. This visit was in the pitch of darkness and danger loomed high to this rightwing Hindu ultra nationalist. Then I saw Murarji Desai visit to village Buttar in Bathinda district and lastly Premier Charan Singh’s visit to Moga. All concluded peacefully and successfully though during the latter’s visit to Moga the Soviet Union had invaded Afghanistan and the situation was rather dicey but seen off with a professional aplomb.

In the big plans of giving Premier Modi a hearty welcome, the BJP-RSS and the defectors Capt. Amrinder Singh, Rana Gurmit Singh Sodhi, Fatehjang Singh Bajwa, Sukhdev Singh Dhindsa, Mokham Singh Chief Spokesman of Damdami Taksal were un-able to pull in heavy crowds. Arrangements to pull in a crowd of 75 thousand people failed miserably. Capt. Amrinder Singh’s soliloquy to 75,000 empty chairs was the highlight of this show. We think that with this debacle of the BJP-RSS and Premier Modi have suffered a big political blow and their defectors fate is sealed.

Internationally, militarily, economically and diplomatically Premier Modi will no longer be in the heavy weight league. Sometimes hubris, arrogance and hatred for the minorities, Schedule Castes, Advasis or Tribal’s is a price fascists and Nazi’s have to pay. Those who call for President’s rule in the Punjab, must have seen that none of them have a following or mass appeal. Democracy must always prevail and triumph.

Simranjit Singh Mann is the President of the Shiromani Akali Dal Amritsar. Previously he was an Indian Police service officer who had served as Senior Superintendent of Police of both Ferozepur and Faridkot districts. He had seen, arranged and successfully seen to the risky visits of former Foreign Minister Vajpayee, Premier’s Murarji Desai and Charan Singh. – Lakhvir Singh, Webmaster Shiromani Akali Dal Amritsar. Email: lucky2275.ls@gmail.com

Need for Ottawa and Canberra to confirm whether the Hindu Indian state is going to keep the Sikh’s perpetually in the dock. – Simranjit Singh Mann

The founder Dyal Singh Majithia converted to a Hindu sect, therefore, The Tribune has little respect for the Sikh religion and nation. Simranjit Singh Mann

Sikh representatives must sit at the review of the IWT as they are a sui generis sovereign people and suffer the ill-effects of the 1960 World Bank charter. Their Homeland is a riparian state. – Simranjit Singh Mann

Need for Ottawa and Canberra to confirm whether the Hindu Indian state is going to keep the Sikh’s perpetually in the dock. – Simranjit Singh Mann

The founder Dyal Singh Majithia converted to a Hindu sect, therefore, The Tribune has little respect for the Sikh religion and nation. Simranjit Singh Mann

Sikh representatives must sit at the review of the IWT as they are a sui generis sovereign people and suffer the ill-effects of the 1960 World Bank charter. Their Homeland is a riparian state. – Simranjit Singh Mann