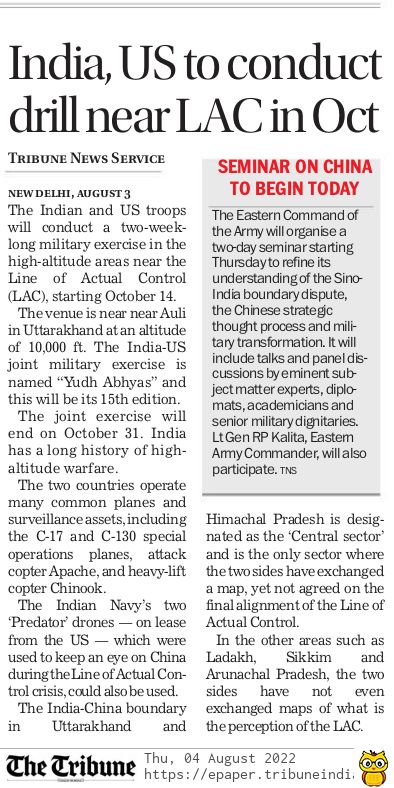 Comments by Simranjit Singh Mann:- Shiromani Akali Dal (Amritsar) states that why is THIS (Theocratic Hindu Indian State) shying from the obvious? This military drill should be held in Ladakh where there are deep incursions, one in 1962 when Communist China occupied 39,000 sq kms of territory and later in 2020 when it occupied 900 sq kms of territory in Ladakh.

Holding exercises with the US in the Central sector is meaningless because this sector has already been demarked. The aggression, in Ladakh needs clearing and on the question of this grave humiliation the Hindu Indian state should not be hiding its head in the sand like an ostrich.

The Sikhs are concerned about Ladakh because Ladakh was annexed by the Lahore Darbar (Sikh Empire 1799-1849) in 1834 and it is un-fortunate that the Hindu Indian state cannot protect the Sikh territory.

In future Sikhs must be made to sit on the table when Indo-Chinese talks take place.

On the Indus-Water Treaty Sikhs must be made a part of this treaty as the waters pertain to the Sikh territory.