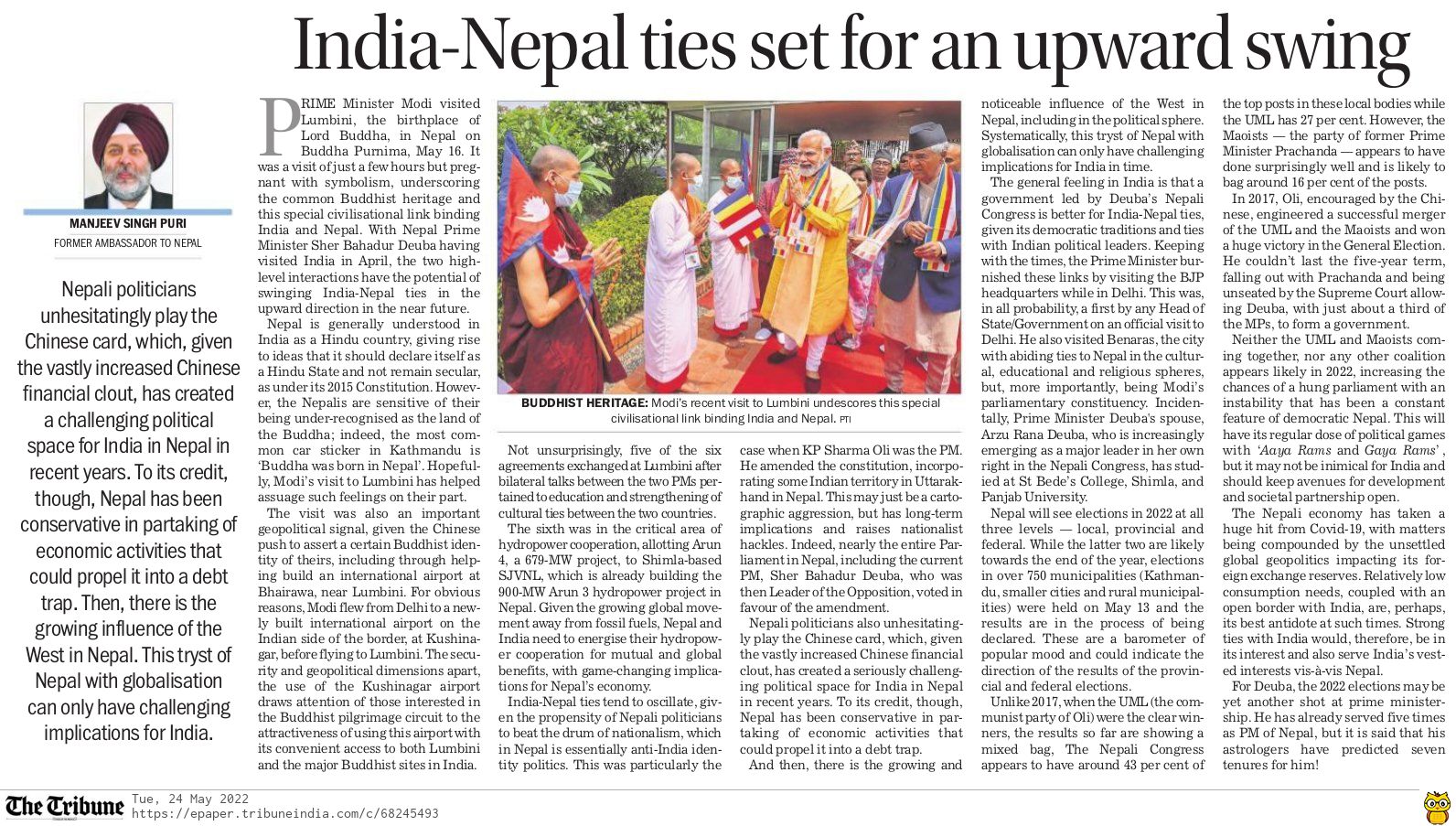 Comments by Simranjit Singh Mann: Shiromani Akali Dal (Amritsar) states that our party does not think that The Tribune has given a truthful and honest analysis of the Indo-Nepal relations.

Since 1947 the Hindu Indian state has had its eyes on Nepal like it had to covet Sikkim, Goa, Jammu & Kashmir and Hyderabad. It has been a desire like Adolf Hitler greed to gobble Austria, which he did.

This newspaper has not mentioned that Rajiv Gandhi as Premier and now Premier Narinder Modi during their respective tenures have laid economic blockages to Nepal in the hope to starve its populace and make it submit. In the wake of these blockages Nepal had no option but to seek a passage to Communist China for relief.

We are surprised at the Hindutva’s new love for Nepal and Premier Modi’s trying to create and old relationship with Buddhism. It must not be forgotten that Shankracharya had said Buddhism (Mahayama) was a teaching of non-existence and destruction. Hinduism was the arch foe of Buddhism and the main architect of its downfall in India.

Swami Viveka Nanda admitted that Shankracharia ordered the burning of Buddhist monks and the University of Nalanda was also destroyed at Shankracharia’s orders.

Now by Premier Modi’s visit to Lumbini in Nepal on the occasion of Buddha Poornima is rather hypocritical.

The actions of Shankracharia led to Buddhism fleeing to Afghanistan, Tibet, China, Sri Lanka and South East Asia. Today though Communist China does not believe in religion, yet it is the main benefactor of Buddhism and treats it with respect though it has expelled the Dalailama from Tibet.

Now we come to the next point of bullying a land locked country like Nepal with which the Hindu Indian state has begun a territorial dispute which the former Army Chief General Narvane had said it was at the behest of Communist China that Nepal was claiming Hindu Indian territory. The General had also threatened a military intervention to settle this dispute at Kalapani territory, a 35-square-kilometre area at the India–Nepal–China trijunction in North West Nepal, and Susta, a 20-square-kilometre–140-square-kilometre area in Southern Nepal. What is Premier Modi going to tell Nepal about these Hindu India’s cartographic claims made by it on Nepal?

Our party has cautioned Nepal in the past not to allow Hindu India to lay railway tracks into Nepal as it would be inviting a Trojan Horse into its territory. But we do not understand the strategy of it allowing these tracks to be laid into Nepal.

The Sikhs have always had very good relations with Nepal since it gave political asylum to Maharani Jind Kaur the widow of the great Sikh Empire ruler Maharaja Ranjit Singh after the fall of a Sikh Empire. Therefore, the Sikhs are very watchful of the independence and sovereignty of Nepal and have always looked to its welfare and prosperity.

The Tribune must explain its editorial which is full of inaccurate information.
God bless The Tribune and the Hindu Indian state.