If Ukraine can fight to defend its land why can’t the Hindu Indian state fight to retrieve its territory surrendered to Communist China in 1962 and 2020? – Simranjit Singh Mann 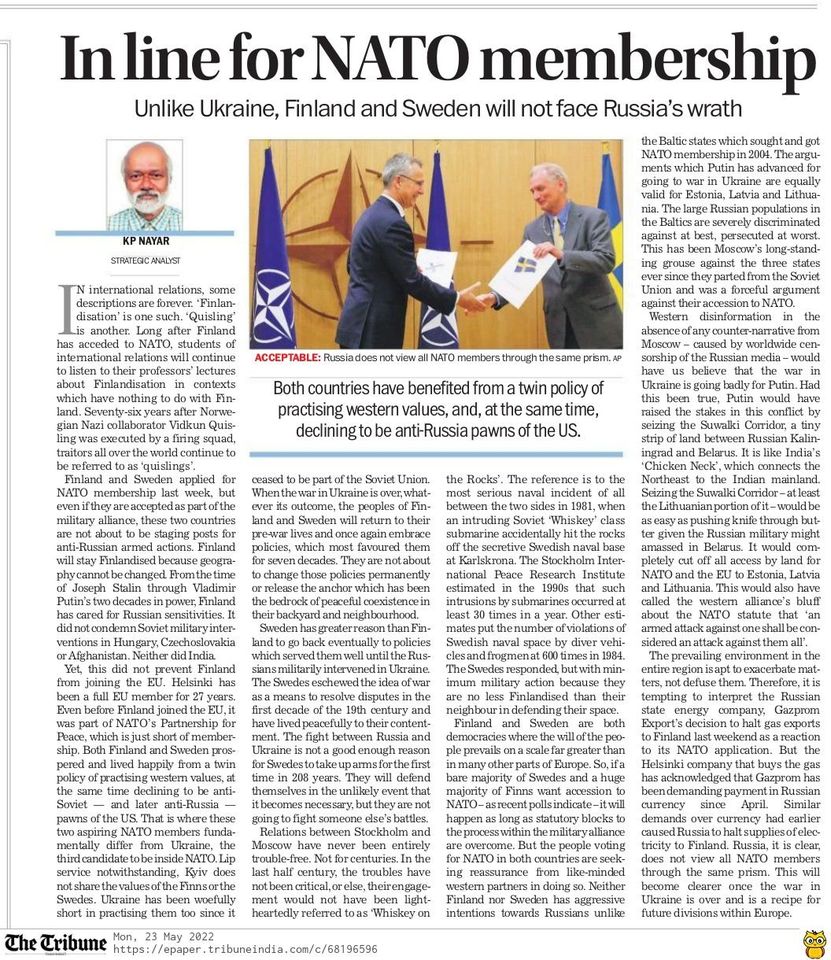 If Ukraine can fight to defend its land why can’t the Hindu Indian state fight to retrieve its territory surrendered to Communist China in 1962 and 2020? – Simranjit Singh Mann

Comments by Simranjit Singh Mann: Shiromani Akali Dal (Amritsar) states that this is a good article but biased heavily in favour of Russia.
The author Mr. KP Nayar writes that the Western media is spreading disinformation about the Russian military progress against Ukraine. If this is true, then the Hindu Indian state which also supports Russia in this uncalled for invasion of Ukraine, the Hindu Indian state has its diplomatic missions along with the intelligence agency R&AW gathering the information that would favour the Russians and gladden the Hindu mind. These missions are present in all the Scandinavian countries and favourable reports from these sources would happily be presented in the Hindu Indian media, both print and electronic media.
As far as seizing the Suwalki Corridor by Russia is concerned, we do not have great knowledge as the author possesses but we can say with all our reading that such a misadventure would lead to World War III. In such an event Communist China would immediately seize the Chickens Neck and cut off the North-East from the Hindu mainland.
Communist China has always said that Tibet is like the palm of its hand and its five fingers are Nepal, Sikkim, Bhutan, Ladakh and NEFA. In such an event Communist China would have fulfilled its long time desire since 1948 and completed its territorial claims for all times to come.

We do not think the Hindu Indian state would retaliate to regain the lost territory as when it surrendered 39,000 Sq. Kms. of Ladakh territory to Communist China in 1962 and another large chunk of 900 Sq. Kms. in 2022, it has made no effort to reclaim these surrendered territories in Ladakh.
Since the author writes so favourably in the interest of Russia and the Hindu Indian state we ask one question, that if Ukraine is continuing to fight and challenge the Russian invasion, what is it that the Hindu Indian state gives up so easily to Communist China.
On the other hand if it has to take on the stateless Sikh’s as in Operation Bluestar of 1984, the Hindu Indian state invites the armies of Soviet and Britain to fight besides its own to take on the stateless Sikh’s who had only World War I and II weaponry?
The anniversary of Operation Bluestar 1984 will soon fall on 6th June, 2022 and the BJP- RSS Union Government has called an alert on all its borders and stuffed a thousand strong battalion of the Central Paramilitary Force into the Punjab besides putting the Air Force and Army on alert.
This is the case since Operation Bluestar since 1984. Why does not the radicalized BJP- RSS Union Government led by Premier Nerandra Modi sit with the Sikh’s and try to fathom the reason that the Hindu state resorted to such a ruthless and barbaric action against the stateless Sikh’s, find the cause and talk and think of a permanent settlement for all times to come ?
The Tribune which invites authors to write on military matters must also think that for the good of the Punjab and their Newspaper, solving this imbroglio would be a good solution.