The Minorities doubts about the Hindu Indian state’s military and the new CDS. Hope these will be removed. – Simranjit Singh Mann 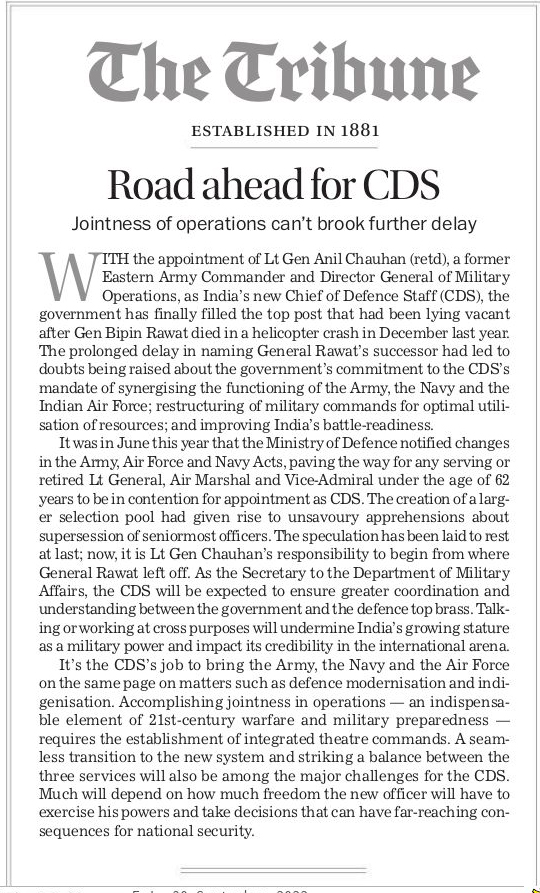 The Minorities doubts about the Hindu Indian state’s military and the new CDS. Hope these will be removed. – Simranjit Singh Mann

Comments by Simranjit Singh Mann: Shiromani Akali Dal (Amritsar) states that we are very happy that the Hindu Indian state has found itself a new Chief of Defence Staff, Lt. General Anil Chauhan. He is said to have a good record as D G Military Operations and fighting insurgencies.
According to our Party the General has no war record and fighting endless insurgencies in the North East, Punjab, Jammu Kashmir, Chattisgarh, Jharkhand, Maharashtra, Bihar, Arunachal Pradesh and Orissa means that his country is at war with its own people and cannot concentrate in removing Communist China’s aggression of Ladakh in 1962 and now in 2020.
That is the question we put to The Tribune and the Hindu Indian state which is perpetually at war with its Minorities, Schedule castes and Adivavsis or Tribal’s.
The other question is when the minority Sikh’s were besieged by Hindu mobs in 1984 and the Muslims in 2002 what were the three services- Army, Navy and Airforce doing, not coming out of their respective barracks and cantonments and checking and saving the two minorities from the evil crime of genocide?
Will General Chauhan ponder about these questions and explain what he will do if rampaging Hindu mobs resort to the same crime in future. Will he liberate Ladakh which was annexed by the Lahore Darbar (Sikh Empire 1799-1849) in 1834? Will the victims of the insurgencies the General fought against; help him if he has to liberate territories from Communist China – especially Aksai Chin? We want a CDS who can serve the country and not only Hindutva. What are his views on AFSPA (Armed Forces Special Powers Act.), CAA, NRC and NPR, abolishing the Sikh Regiment and Sikh Light Infantry Regiments.
The Tribune compliments the Hindu Indian state by stating – “India’s growing stature as a military power?” Which military power is The Tribune writing about? The one that cannot protect its borders from an aggressive Communist China. A military whose weaponry has out lived its worthiness and 67 percent of which is obsolete? A Military that cannot protect its minorities when besieged by majoritarian Hindu mobs? We do hope that the new CDS will tell us whether the new recruits will have a tenure of only four years in service and how they will learn their respective trades in this short period of time and be battle ready?

We must also learn when the Allied forces in World War II had the Pacific and Atlantic theaters of war, how the Hindu Indian state will have plenty of theaters? Acquisitions of war material must be acquired immediately for all the three services and not left to the dreams of the Hindutva state. If the Hindu Indian state’s arsenal will await indigenous armaments only, then we must await endlessly for this miracle to take place.

The Hindu Indian army and Islamic Pakistan army, lineage being the same, tendency to commit a coup is always present. Simranjit Singh Mann

The Hindu Indian army and Islamic Pakistan army, lineage being the same, tendency to commit a coup is always present. Simranjit Singh Mann