Like rats they are abandoning a sinking ship. BJP-RSS and AAP party should give them no Personal flotation devices. Simranjit Singh Mann. 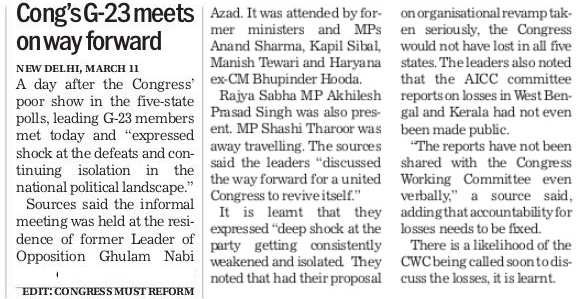 Like rats they are abandoning a sinking ship. BJP-RSS and AAP party should give them no Personal flotation devices. Simranjit Singh Mann.

Comments by Simranjit Singh Mann: Shiromani Akali Dal (Amritsar) states that these are an useless lot drawing room fat bellied former soldiers of the Congress party. They have grown rich by the success of their party. They do no ground work. Are ill conversant with the poverty of the state and done nothing to fulfill the slogan of Roti, Kapra, Makan given long ago.

They are all responsible for Operation Bulestar of 1984 in which foreign troops of Britain, Soviet’s and Hindu India’s attacked the stateless Sikhs in the holiest Sikh shrine The Darbar Sahib (Golden temple). The up-coming leadership of the Sikhs was assassinated, the Sikh Reference Library and the Toshakhana (treasury) of Darbar Sahib looted and taken away as war booty.

In 1947 the British handed over both these territories of the Darbar to the majoritarian Congress Hindu leaders but they could not keep Kashmir or Ladakh in one whole. In 2020 their successor the radicalized BJP-RSS Union Government gave away 900 sq kms of Ladakh territory to Communist China.

The Sikhs have sentiments for these territories and these Congress men who like rats are abandoning a sinking ship are awaiting an excuse to join the extremist Hindutva BJP-RSS organization. One of them Mr. Ashvni Kumar has already jumped the sinking ship. That much for Hindutva character. He is seeking a Rajya Sabha seat from the newly formed AAP Government of Punjab.

Good luck to all the deserters.