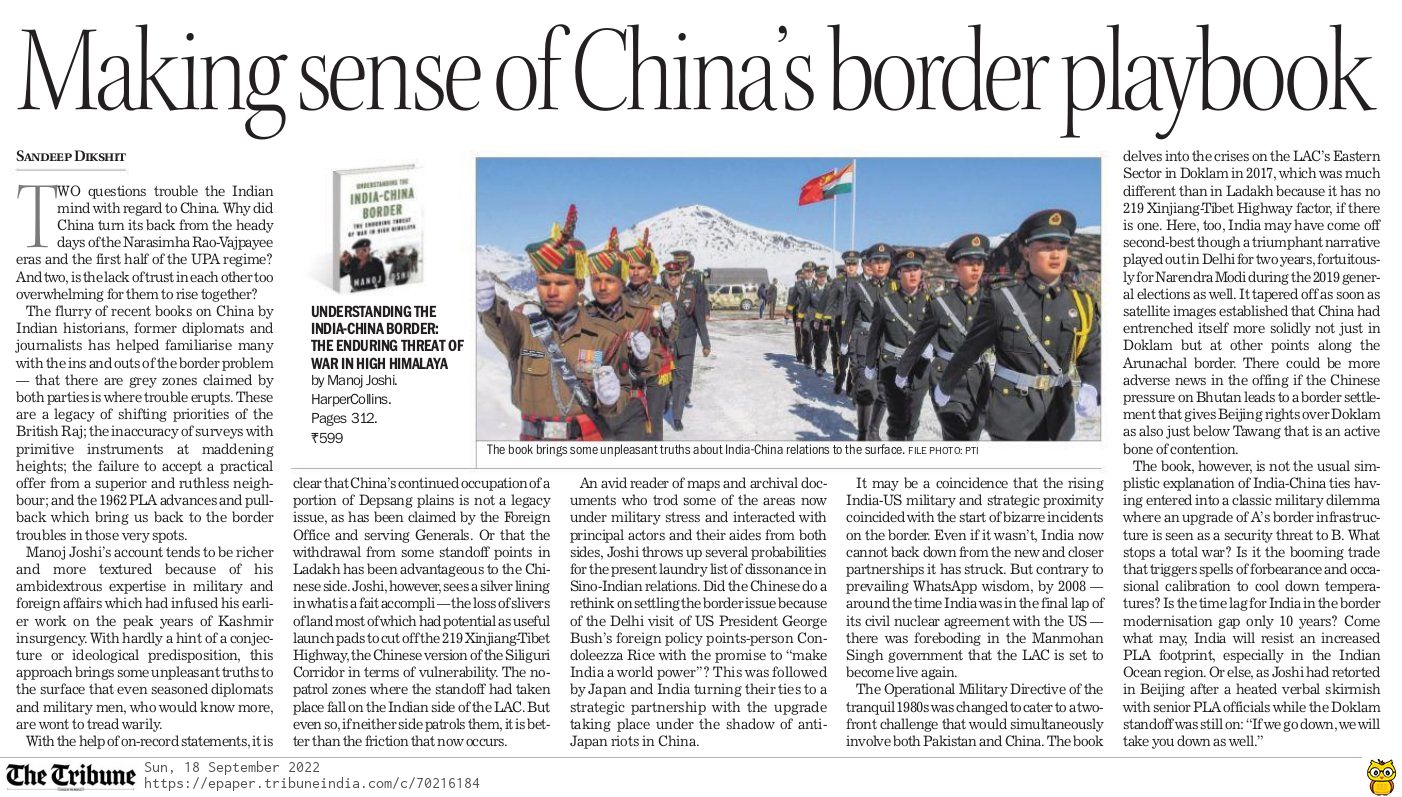 Comments by Simranjit Singh Mann: Shiromani Akali Dal (Amritsar) states that this is a very learned and accurate book on Indo-China border. The author has spared neither Hindu India nor Communist China for the dispute which is a running sore for both the countries.

Having said this it must be noted that Hindu Indian writers writing about this vexed problem do not mention that it was the Lahore Darbar (Sikh Empire 1799-1849) which annexed Ladakh in 1834 and made it an integral part of the Sikh Empire.

As Sikhs we are of the opinion that Ladakh is our territory which in the period of imperialism and later neo imperialism such borders have been thrust upon the Sikhs like the Radcliffe Line of 1947, then the division of Punjab in 1966 by the Hindu Indian state.

As Sikhs we have also put on record that the Indus Water Treaty was also thrust upon the Sikhs without the Sikh participation.

Apart from Mr. Manoj Joshi, the author of this book another IPS Officer has written a book on the Sikhs. He see too avoids stating the annexation of Ladakh in 1834 by the Lahore Darbar.

When post 1947 writers begin writing on the Northern borders, they by purpose try and wipe out the Sikh territories, indulging themselves in pro Hindutva cartography, which we reject, imperial and neo imperial boundaries of the Sikh Homeland.

Let it not escape the notice of the records that the Lahore Darbar (Sikh Empire 1799-1849) annexed Kashmir in 1819 when it was a province of Afghanistan. No power on earth whether the British Soviets or Americans have left their footprints in Afghanistan save the Sikhs and their empire.

Watching the funeral of Queen Elizabeth, her crown placed on her coffin made us Sikhs see the Kohinoor Diamond, which was robbed from the Lahore Darbar’s (Toshakhana) treasury in 1849 by the Governor General Dalhousie and given to Queen Victoria.

The rulers of the Sikhs Empire had acquired this diamond when Kashmir was annexed from Afghanistan. This diamond was with the Afghans. Naturally the Sikh heart burns and bleeds when we see a sui-generis sovereign Sikh people after 1947 being subjugated by Muslim rule in Islamic Pakistan and Hindu rule in Hindu India.

The Queen’s crowns and the Sikhs Kohinoor Diamond.