Why should the Hindu Indian state get the Presidency of the United Nation Security Council (UNSC)? Give Reasons. Simranjit Singh Mann. 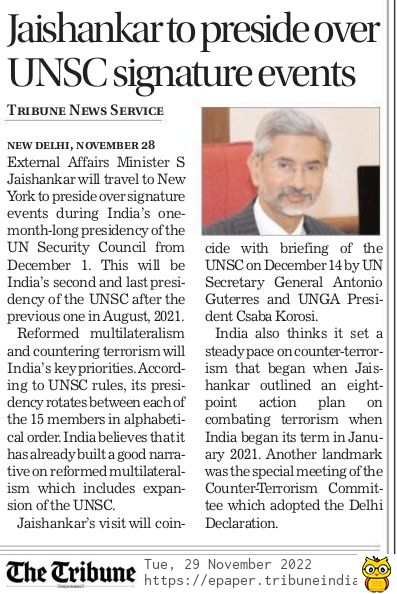 Why should the Hindu Indian state get the Presidency of the United Nation Security Council (UNSC)? Give Reasons. Simranjit Singh Mann.

Shiromani Akali Dal (Amritsar) states that it is all very well that the Hindu Indian state gets space from time to time in the United Nation Security Council (UNSC).

But first it must explain that on 01st of January 1948 the then Premier Jawhar Lal Nehru took the case of Kashmir to the United Nation and the United Nation Security Council (UNSC) passed a resolution that that very year a plebiscite should take place in Kashmir to settle its troubled and contested status. That resolution is yet to be implemented?

The Hindu Indian state has not signed and ratified the following UN protocols, treaties, covenants and conventions on Human Rights, some of them being:

1. 1948 Convention on the Prevention and Punishment of the Crime of Genocide.
2. 1951 Convention relating to the Status of Refugees.
3. 1954 Convention relating to Status of Stateless Persons.
4. 1960 Declaration on the Granting of Independence to Colonial Countries and Peoples.
5. 1965 International Convention on the Elimination of All Forms of Racial Discrimination.
6. 1966 Optional Protocol to the International Covenant on Civil and Political Rights.
7. 1967 Protocol Relating to the Status of Refugees. It is because there are still 30,000 Sikh Stateless refugees in Kashmir since 1947.
8. 1972 Treaty on the Limitation of Anti-Ballistic Missile System.
9. 1972 Convention Concerning the Protection of the World Cultural and Natural Heritage. If this Convention had been followed, neither the Darbar Sahib, the Golden Temple would not have been reduced to rubble nor the Babri Masjid in 1992.
10. 1984 Convention against Torture and other Cruel Inhuman or Degrading Treatment or Punishment.
11. 1984 Safeguard and guaranteeing protection of the Rights of those facing the death penalty.
12. 1995 Treaty on the Non-Proliferation of Nuclear Weapons.
13. 1996 Comprehensive Nuclear Test Ban Treaty.
14. 1997 Convention on the Prohibition of the Use, Stockpiling, Production and Transfer of anti-Personnel Mines and their Destruction (the Ottawa Convention on the abolition of landmines).
15. 2001 Rome Statute, by virtue of which the International Criminal Court has been set up at The Hague.
16. 2010 The Convention on Cluster Munitions prohibits all use, stockpiling, production and transfer of Cluster Munitions.

The Hindu Indian state also must tell the world why no criminal action has been taken against the criminals and the armed forces that committed the genocide, memoricide, vandalism and ethnocide of the Sikhs in 1984 during the period Indira Gandhi and later Rajiv Gandhi were the Prime Ministers.

The Hindu Indian state must clarify why the Islamic Babri Masjid was demolished in 1992 by the BJP-RSS vandals led by L.K. Advani and others and how Prime Minister Narinder Modi coaxed and bribed the Supreme Courts Chief Justice Gogoi to give a verdict in favour of building the Ram Mandir on the very site of the demolished Babri Masjid.

The United Nations has still not verified why Mr. Narinder Modi as Chief Minister of Gujarat had over 2000 Muslims massacred in 2002 in cold blood and till date no action has been taken against Mr. Modi. The United States had cancelled Mr. Modi’s visa to the US then but in 2014 the US revived his visa. Why?

In 2013 Mr. Narinder Modi as Chief Minister of Gujarat dispossessed 60 thousand Sikh farmers of their legitimately held farmlands rendering them landless and homeless. What action has been taken against this humongous crime?

Christen Churches have been demolished, Christen Nuns have been raped and Australian Preacher Stains and his two sons were burnt alive by BJP-RSS fanatics in Orissa.

In Kashmir the autonomy of that state has been revoked, Article 370 and 35A of the Constitution have also been done away with. There is no legislature in Jammu & Kashmir. People there live under direct rule by the extremist BJP-RSS Union Government in Delhi. The draconian law AFSPA (Armed Forces Special Powers Act) gives unbridled powers to the security forces to kill, maim, kidnap, abduct, murder, rape, molest, torture, detain any Kashmiri for an endless time, with impunity.

Now we ask the Secretary General and the Security Council Members how India will hold the top position in the United Nations?