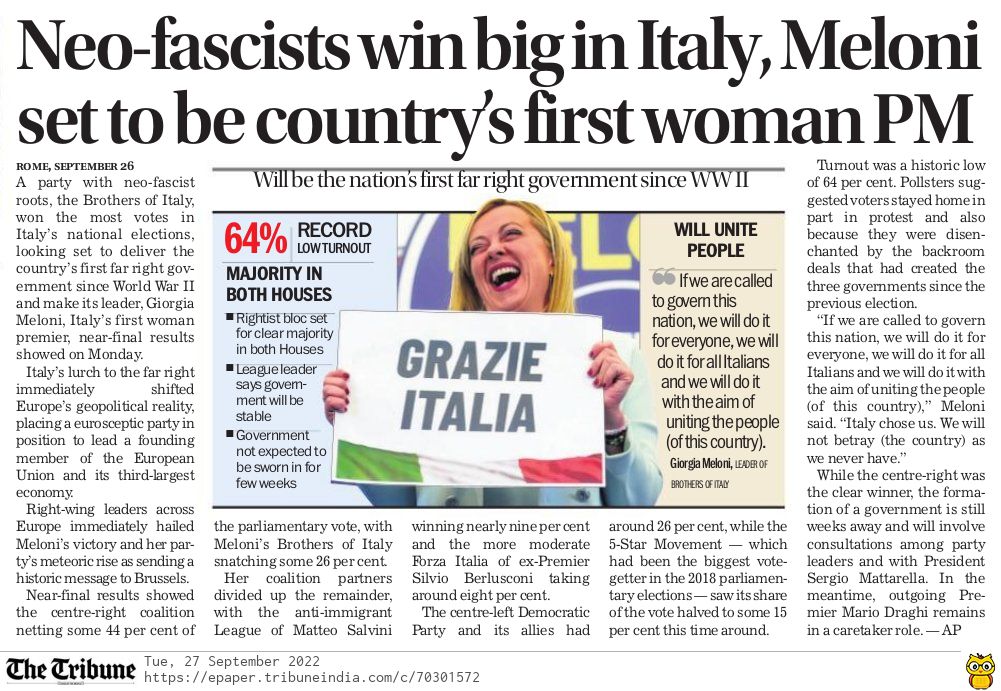 Comments by Simranjit Singh Mann: Shiromani Akali Dal (Amritsar) states that we think relations between a Neo-fascists Italy and the Hindu Indian state led by the right wing radicals headed by the BJP’s Premier Nerandra Modi, and RSS Mr. Bhagwat’s led fascists will make Italy and the Hindu Indian state come closure. But last time the fascists came to power under Mussolini in Italy, this led to the utter ruin of Italy which was earlier united as a single state under Cavour, Garibaldi and Mazzini.
We must not forget the close relationship of Jawaher Lal Nehru and M. K. Gandhi with Mussolini through Shubhash Chandra Bose who was sent by these Hindutva leaders to build close ties with the fascists of Italy and Japan and the Nazi’s of Adolf Hitler.
Relations under the fascist BJP – RSS regime of Premier Nerandra Modi were not good with Italy because the BJP – RSS’s antagonist dynastic Congress Party’s leader Mrs. Sonia Gandhi hailed from Italy.
Relations between these two Parties were so distant that when the Congress Party won the elections to Parliament in 2004, it was expected that Mrs. Sonia Gandhi would become the Prime Minister. In utter rage BJP – RSS’s leader Shushma Sawaraj declared that she would shave off her head if such a thing happened. In the Hindu religion when a woman becomes a widow, her hair are shaved at the holy pilgrimage site of Badri Nath. So Mrs. Sonia Gandhi did not become the Premier, instead Sardar Manmohan Singh, a Sikh was catapulted to this high position.
Radicalised Hindu’s with the BJP – RSS hate the Sikh’s too. As proof see the latest films Lal Singh Chadda and Jogi, But they had to swallow a bitter pill as Monmohan Singh remained Premier from 2004 and 2014.
Presently in the Supreme court there is no Sikh Judge. In Premier Modi’s Union Cabinet there is no Sikh Minister on the traditional portfolios held by a member of the Sikh faith, like Defence, Home, Finance and Foreign Affairs. There is no Sikh Army Commander or a Sikh of equal rank in the Navy and Airforce, no intelligence agency is headed by a Sikh officer.
Now the fascists relations between the two countries, we hope will improve and trade and commerce with Italy will increase.