The Supreme Court and National Human Rights Commission are requested to note and take action on the Advocates report on receiving a call from UK. – Simranjit Singh Mānn 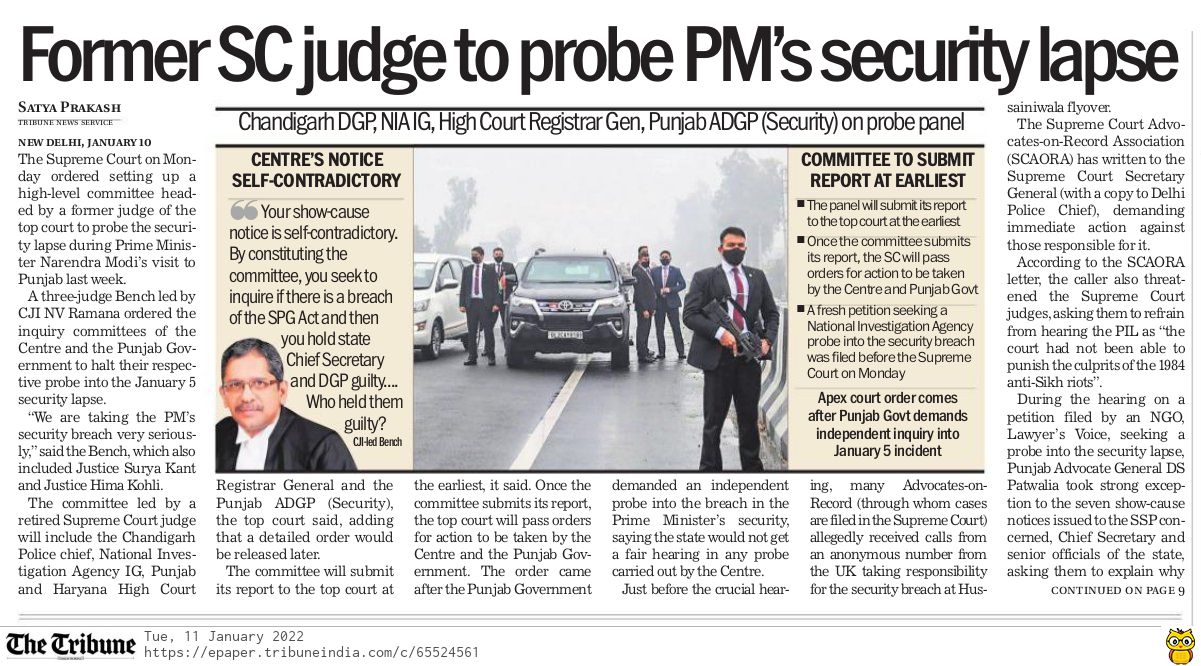 The Supreme Court and National Human Rights Commission are requested to note and take action on the Advocates report on receiving a call from UK. – Simranjit Singh Mānn

Comments by Simranjit Singh Mann: Shiromani Akali Dal (Amritsar) states that from the report printed in The Tribune dated 11th January 2022, we take a quote which is relevant to the so called security lapses of the Premier: “Advocate on record (through whom cases are filed in the Supreme Court) allegedly received calls from an anonymous number from the UK taking responsibility for the security breach at Hussainiwala flyover.
The Supreme Court Advocates-on-Record. Association (SCAORA) has written to the Supeme Court Secretary General (with a copy to Delhi Police Chief), demanding immediate action against those responsible for it.
According to the SCAORA letter, the caller also threatened the Supreme Court judges, asking them to refrain from hearing the PIL as “the court had not been able to punish the culprits of the 1984 anti-Sikh riots”.”
We remind the Advocate mentioned above that Premier Modi whom he says was not accosted at Hussainiwala but his cavalcade could not move forward at the Bridge between villages Piaranana and Misriwala. About this incident I have mentioned in my report of 8th January 2022, which is on my Facebook page:
Our Party is not aware whether the said Advocate on Record which we quote above is factually correct in receiving such a call from the UK. But having been born a Sikh and having studied the characteristics, and what British and other historians have written about the Sikh’s like Cunningham who states – “Sikh’s dare and endure but never accept defeat”, with Sardar Udham Singh travelling to England and after 21 years avenged the massacre at Jallainwala Bagh of 1919 by killing Micheal O’ Dwyer and several other examples of Massa Rangarh who defiled the Darbar Sahib (Golden Temple) and then others who need not be mentioned (recall what happened after Operation Bluestar of 1984) we cannot rule out the possibility of the Advocate quoted above receiving such a call from UK.
Our Party has always wondered why the Supreme Court has never taken a note of Operation Bluestar of 1984 when Indira Gandhi and the Hindu Indian State committed the Genocide, Memoricide, Ethnocide and Vandalism of the Sikh peoples and their places of worship. Later that very year in 1984 Premier Rajiv Gandhi let loose a reign of terror all over the country and at the very door steps of the Supreme Court committing the Genocide of the Sikh people all over the country.
The same Genocide of the Kashmiri people is being committed by the Security Forces who under the Law AFSPA (Armed forces special powers) have the license to kill, maim, torture, molest, rape, kidnap, abduct and detain a Kashmiri indefinitely, all with impunity. This is in violation of Article 21 of the Constitution which states that no person can be deprived of his life and liberty without following the procedure laid down by Law. The Supreme Court is the guardian of the Constitution. Then does it not know or the National Human Rights Commission not know that this heinous crime is taking place under their respective noses. Should not these two highest bodies who are charged with protecting the Constitution take suo moto notice of these crimes against humanity being perpetrated in Kashmir?