Punjab and Haryana High Court is passing the buck to the Punjab and Centre’s Election Commission’s because it failed to catch the bull by its horns. – Simranjit Singh Mānn 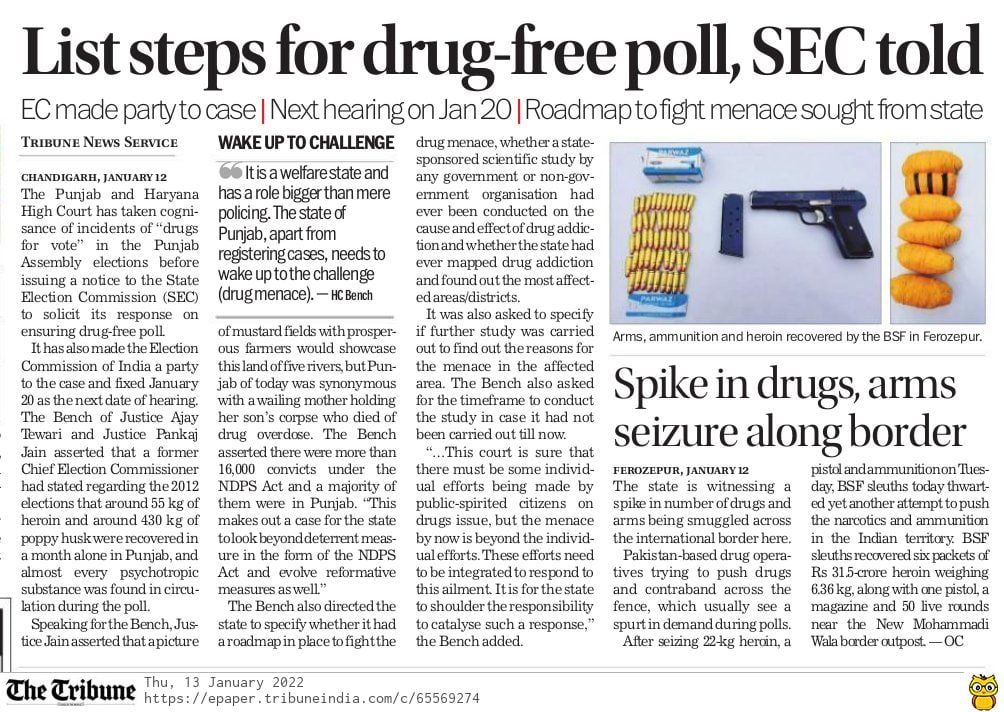 Punjab and Haryana High Court is passing the buck to the Punjab and Centre’s Election Commission’s because it failed to catch the bull by its horns. – Simranjit Singh Mānn

Shiromani Akali Dal (Amritsar) states that the Punjab & Haryana High Court, its judges Mr. Rajvir Sherawat, Arvind Sangwan, Anil Bajaj and Ms. Gill have mucked up the two crimes that bedevil the Punjab, these being drug and sacrilege crimes. Our party reports on these as follows:-
Comments by Simranjit Singh Mann: Shiromani Akali Dal (Amritsar) states that on the one hand the Punjab & Haryana High Court has let loose the biggest drug dealer Mr. Bikram Singh Majthia on bail, but on the other hand it is issuing notice to State Election Commission and Election Commissioner of India to stop drug trafficking during the coming elections. How can the State Election Commission ensure a drug-free election when the High Court has it self connived insetting free the biggest drug merchant free on bail, who is going about threatening the Police interrogators that after the elections the Shiromani Akali Dal Badal is going to form the next government and it will take to task all the Police interrogators and the previous DGP Chattopadhyaya.

Even in the sacrilege cases where the holy scriptures of the Sikhs have been defiled by the Sarsa religious head Ram Rahim in connivance with the former Chief Minister Prakash Singh Badal, his son Sukhbir Singh who was the Home Minister and the DGP Sumedh Saini, they have all been given reprieve from investigation by Punjab & Haryana High Court Judges Rajvir Sheravat, Arvind Sagvan and Anil Bajaj.

In the drug case High Court Judge Gill has been very magnanimous in bailing out Mr. Bikram Singh Majthia who had spread terror amongst the Police interrogators that they will suffer grave consequences if they, while interrogating him pass any strictures against him in their respective case diaries. The Punjab & Haryana High Court has made a laughing stock of it self in issuing notices to the State Election Commission and the Election Commission of India to stop the flow of drugs during the election period in the Punjab state.

Our party is sending a copy of this report to the United Nations Office on Drugs and Crime (UNODC) to inform it of the conditions prevailing in THIS (Theocratic Hindu Indian State) regarding the spread of drugs and the connivance of the Punjab & Haryana High Court Judges in this most dangerous trade and crime.

It is un-fortunate that the Punjab & Haryana high court are now ordering the Central and Punjab Elections Commissions to control and stop this menace. We do not think that the Chief Justice Mr. Jha of the High Court is steering his Court with a firm grip. It’s rather lackadaisical. What is the point of locking the stables after the horses have bolted?