Impractical but a good compassionate order by the Supreme Court and the Punjab and Haryana High Court. – Simranjit Singh Mānn 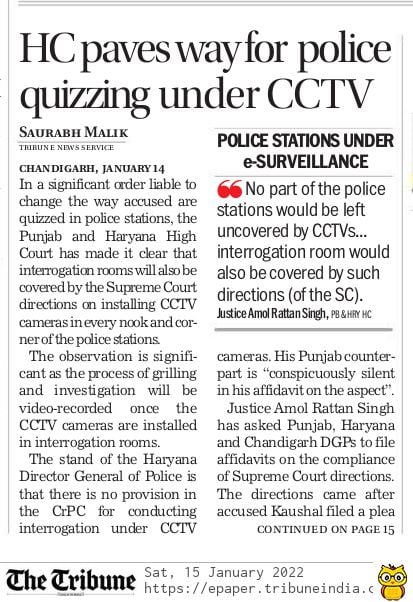 Impractical but a good compassionate order by the Supreme Court and the Punjab and Haryana High Court. – Simranjit Singh Mānn

Comments by Simranjit Singh Mann: Shiromani Akali Dal (Amritsar) states that we do not understand why the Punjab and Haryana High Court is passing orders that are impossible to implement.
For example if kidney transplants are illegal, anti social and against Human rights. These transplants can only take place in a legal manner where hospitals like the PGI in Chandigarh are authorized to perform them.
However, these transplants also take place in unauthorized hospitals, though their operating theaters which are equipped with CCTV Camera’s. If such Hospital’s perform a kidney transplant operation, these take place in other theaters which are kept secret and are not in the public eye.
Our Party, however, is pleased that the High Court and the Supreme Court abhor illegal third degree tortures. Now the High Court and Supreme Court ordering that CCTV Camera’s be placed in interrogation rooms of the Police Stations is a good order but impractical as usually Police Stations are crowded with illegal suspects and information of torture is always likely to become public. Therefore as far as we know interrogation rooms in Police stations are never disclosed or kept.
Interrogations are normally done in CIA Stations which is known as Crime Investigation Agency. These are normally out of reach of the eye of the Public and the legal courts. Third Degree methods are used in these stations. If the Police thinks that interrogations by third degree methods is not safe in CIA Stations then the person under interrogation is taken to abandoned houses in rural areas or to Canal or PWD rest houses which are seldom used by officialdom or public men.
Therefore ordering CCTV Camera’s in Police station interrogation rooms is an impractical order and shows that Judges who are meant to be professionals in the criminal system are totally unaware of the practicality. This happens when lawyers with long practices in the Bars are not raised to the Bench but from District attorneys and advocate General’s branch, without practical field experience, are kicked upstairs to the Bench. These creatures are usually children who have Law degrees, practice in the Advocate General’s Office by virtue of their parent holding a high rank in the upper judiciary, civil service or long standing politicians who have or are holding high political rank in the state or central Governments. Many of these spoilt children who are raised to the High Courts or the Supreme Court usually give decisions in favour of the Government in power. They are unaware of UN Human Rights Commission or other agencies like Amnesty International who safe guard Human Rights or know of the Geneva Conventions of war etc.
Our Party feels that this order about police station interrogation rooms having CCTV Camera’s come from well meaning Judges of the Supreme Court and the Punjab and Haryana High Court but these are judges who have been elevated to the Bench through the Advocate General’s Branch.
We want to know how this humane, compassionate and philanthropic order is going to be implemented. The Judges must rise to the bait.