Read below the Comments of Simranjit Singh Mann on the editorial in The Tribune Dated 28th May 2022. 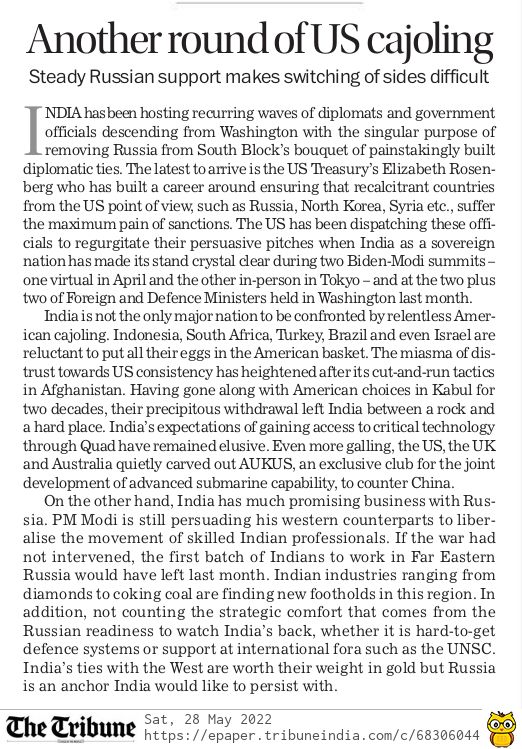 Read below the Comments of Simranjit Singh Mann on the editorial in The Tribune Dated 28th May 2022.

To: The Editor,
The Tribune,
Chandigarh.

In your newspaper The Tribune dated 28th May 2022 you give the views of the majoritarian and sectarian inhabitants who rule the Hindu Indian sub-continent. These views of your newspaper reflect what the Hindu mind thinks, wishes and wants. But your Editorials should be inclusive of the entire population including the Sikhs.

In the recent Quad meet in Japan Communist Chinese and Russian war planes were flown to threaten the leaders participating in the Quad meet. Does your newspaper appreciate this affront to the Hindu Indian leader Premier Narinder Modi. In the least if Russia had respect for the Hindu Indian state it should have shown deference to Modi by not accompanying the Communist Chinese war planes.

Our party wishes to inform you that the Sikhs do not support Russia on the Ukrainian front, a harmless country that has been ruthlessly invaded by the Russians most of the weaponry with the Hindu state is from Russia.

However, Russia controls all the weapons in the arsenal of the Hindu state as it has the chips in the weapons in its hands. Therefore it is doubtful whether S-400 Missiles, Su-30, MiG-29, nuclear submarine etc. will work against Russian supplied weapons to Communist China.

Moreover, the display of Communist China and Russian fighter jets swooping near the area where the Quad meet was taking place was an insult to Russia’s dear friend Premier Nerandra Modi as he was also present. If Russia respected friendship with the Hindu Indian state then in deference to its friend Modi it should not have participated with Communist China in its military display.

What our Party now thinks is that the Russian and Communist China are in a strategic alliance like the old Axis powers alliance.

Since the Hindu Indian state has no experience in Goverence and realpolitik, we think that Hindu India’s alliance with Russia is now a deal of the past and it should think of strengthening its democratic hold and not hound its minorities, schedule castes and Tribal’s.

It should forthwith hold elections to the Sikh Parliament the SGPC (Shriomani Gurudwara Prabandhak Committee) which the BJP- RSS Union Government has turned into a lame duck Parliament for the last 11 years.

The Soviets came to the help of the Hindu Indian state during the period when Indira Gandhi was the Premier and in 1971 she bifurcated Islamic Pakistan in two, giving birth to Bangladesh, the Eastern wing of Islamic Pakistan.

After this, since Soviet Russia had proved itself as a loyal ally of the Hindu Indian state, the majoritarian Hindu literally began worshiping Soviet Russia as one of its deity.

This relationship since the Nehru period with Soviet Russia has sunk into the very psyche and bones of the Hindu. It is not possible to break it.

However, Russia did not come to the aid of the Hindu Indian state when Communist China attacked Ladakh in 2020 and gobbled 900 Sq. Kms. of Ladakh territory. It is a different story that the Hindu Indian state played it safe and did not condemn Russian invasion of Ukraine. The relationship between the two states is like a master and his man Friday.

Perhaps after Russian and Communist China jets have flown together to show their strong alliance at the Quad meet held in Japan, it is possible the Hindu and Premier Modi may change their mind about the spell the Russian’s have cast on them since the day in 1947 when the Hindu Indian state took its birth.