Letter to the Editor, 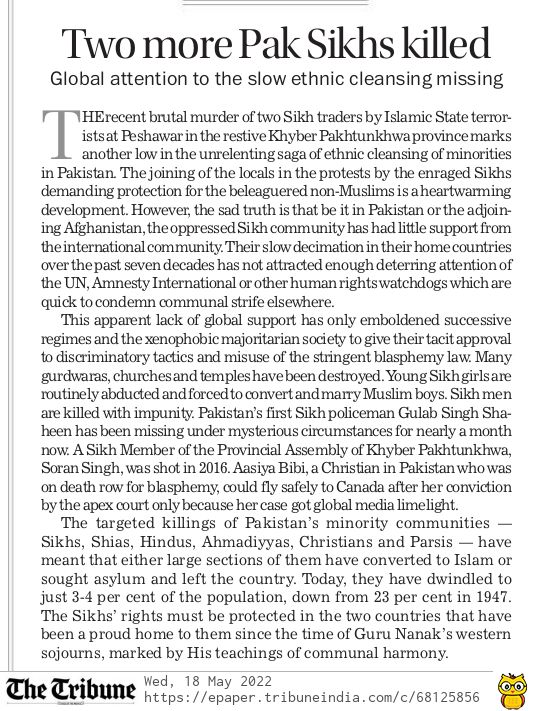 Letter to the Editor,

Our party state that entitled ‘Two more Pak Sikhs killed’ dated 18th May 2022 of your newspaper in The Tribune.

Sikhs must be sovereign to protect their interests. Simranjit Singh Mann.

The Dastardly and cowardly killings of two Sikhs in Pakistan S. Ranjit Singh and S. Kuljit Singh, previously 38 Sikhs murdered by ISIS in Iraq and 25 Sikhs butchered by the ISIS in Guru Har Rai Sahib Gurdwara in Kabul in 2020, in 2000 on the eve of President Clinton’s visit to India 43 innocent Sikhs were massacred in cold blood by the military in village ChittiSinghpura of Kashmir, with impunity and one Sikh doctor murdered in Peshawar last year raises question of Sikhs being deprived of political power and sovereignty, living under the communal rule of the majortarian Hindus, the Sikhs cannot retaliate against the innocent killings of Sikhs.

Therefore, as our Sikh Guru’s ordained the Sikhs must have a separate sovereign and independent country of their own.
The Sikhs have always tried to create a Sikh sovereign state and are in the midst of creating such a state peacefully and democratically.
If the Sikhs had a democratic sovereign state of their own, they would have carried out precision Commando strikes against the perpetrators to avenge the un provoked murders of innocent Sikhs in neighbouring states.
On 11th May 2022 at the SGPC conclave called by President S. Harjinder Singh Dhami for a meeting of Sikh leaders at the historic Teja Singh Samundri Hall the unanimous resolution of 1946 by the SGPC calling for and independent and sovereign Sikh state of Khalistan was reiterated again by the full house of the Sikhs Parliament, must conceder this resolution of 11th May 2022 very seriously, otherwise the Sikhs will be humiliated time and again, year after year by other nationalities killing Sikhs in cold blood. We must stop these national humiliations for all times to come as the Israelis have done.