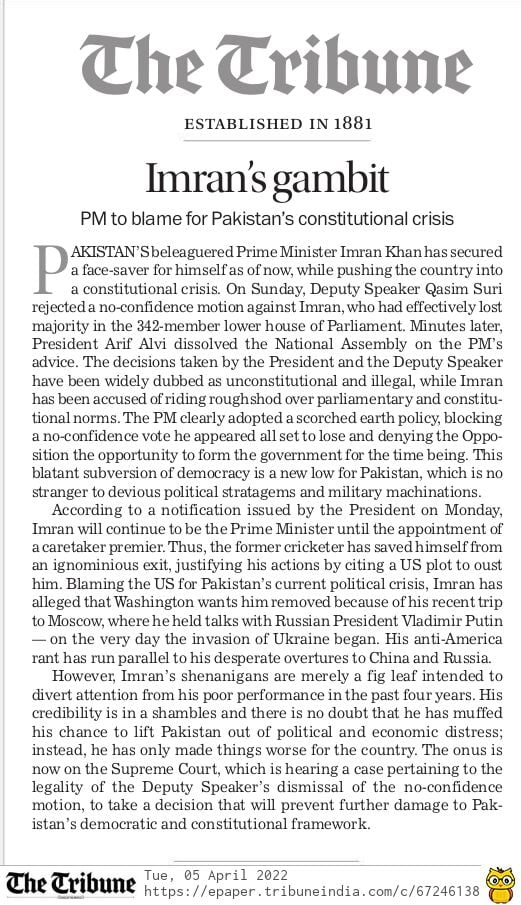 Letter to the Editor
The Tribune,
Chandigarh.

In reference to your editorial in to days newspaper dated 5th April 2022 you have been very critical of Islamic Pakistan’s democracy and its practices.

Our Party the Shriomani Aklai Dal (Amritsar) wishes to bring to your notice that the SGPC (Shriomani Gurudwara Prabandhak Committee) the Sikh Parliament which came into being in 1925 has not had an election to the House for the last 11 years which we think is worse than what has happened in Islamic Pakistan. Such a step is riding rough shod over democratic principles which the Sikh’s inherited from the British Indian Empire.

In the case of Islamic Pakistan, the least we can say is that democracy is breathing as the case has gone up to the Supreme Court which has acted on this great democratic misdemeanour and perhaps it will take the right decision in offering the Government to the Opposition but this is still in the grey area.

In the case of democracy in THIS(Theocratic Hindu Indian State) the Sikh’s have taken the case of the SGPC remaining a lame duck Parliament for several year to the Punjab and Haryana High Court finally to the Supreme Court. But all in vain.

Therefore, to be fair we can state that democracy in South Asia has died and is in the hands of a brutal set of majoritarians who do not care and practice democracy. It is sad that the British handed over power in 1947 to a set of people who are not fit to practice democratic norms.